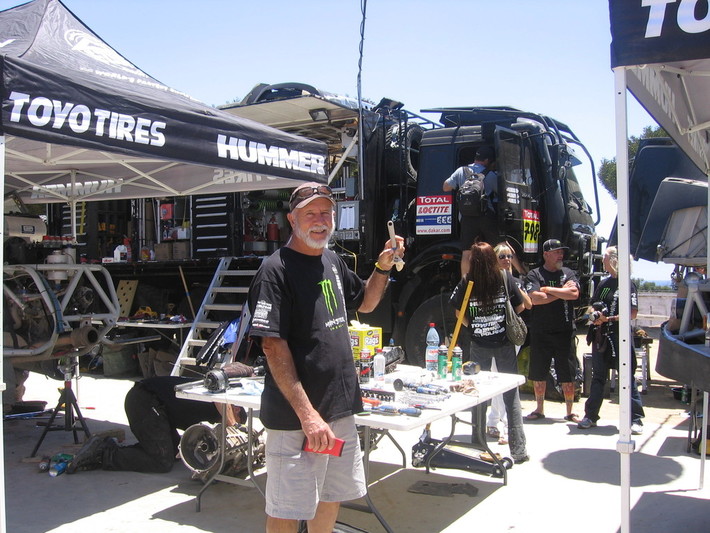 When did you become a Robby fan ?
years ago

Off Road Team to Sonoma

Several of the off-road team will be attending the race at Sonoma. Including Andy Grider (Robby's co-driver and navigator), and both Robby's and Andy's dads.Among other hopefuls are Kyle Robbins, team mgr. and Brad Barrons, mech.
If you're planning on attending the race, stop by and say Hi to the off road guys.

Rene Hernandez said…
so whats the deal now after the new rules from Score??

Walt Pendleton said…
I saw from one of your post that you ended up at Luguna Salado. had a good vantage point on top of the hill at Borgero. I did miss hanging out with you. I enjoy all the neat people I have met in the Baja. I am sure Andy was excited with the win. Did you get stuck or have problems?

Walt Pendleton said…
I was with Baja Dave and Baja Mark, and some friends from Indiana. They came over for breakfast, we headed out together for Checkpoint #2. I climb a hill, fell down a few times on the way up. I got to the top and got the shots. We were having lunch and a dust devil blew the Easy Up away. Dave has had it for 30 years. We had a great time back to San Felipe to celebrate with a fire, drinks and dinner at my house. I wish I could have been there after the race. You and Andy must be thrilled. I hope to see you and Andy again. I will contact you about the 1000.

Walt Pendleton said…
Looks like I will be heading down to San Felipe Friday night. I will probably be down by the Borrego at around 1:30 as you suggested. I might head up the hill a bit if time allows. Have fun.

Will Higman said…
Neil,
We are leaving at O’Dark Thirty Tuesday morning unloading at Estero and prerunning the first half of the course. We are staying at Mike’s Sky Rancho Tuesday and prerunning the second half back to Estero Wednesday afternoon. I will look for you when I get there…
Will

Craig Veld said…
Hay neil do you have another son name dave, or relative I grew up in Bellflower I lived by couthers park. Thought I new a Dave Grider. If not just sayin hi from Paso Robles.