Thinking Of The Gordon Family

The Robby Gordon and Gordon family is loved by many, and the news of Bob Gordon has left us all heartbroken. Please let Robby and his family know how much they mean to you.

Truly Heartbroken Robby,
My Thoughts and Prayers are Strong for You and Max, your Sisters and the Entire extended Gordon family.

Words can't ease the shock and pain of such a tragic loss. We pray your family finds some comfort in the support of those who care.

Permalink Reply by Charles Hylton on September 15, 2016 at 3:15pm
So sorry to hear of your loss Robby we all here in Indy are thinking of you and your family!

Thoughts and prayers to the Gordon Family

So sorry for your loss Robby.. My best thought are with you during this terrible time.

Permalink Reply by Anthony Peacock on September 15, 2016 at 3:32pm
Thoughts with Robby and whole Gordon family so very sorry for your loss.

Robby Gordon just told the Register that his father missed a doctor's appointment Wednesday, which is when he and others became concerned.

They began a search, and his dad's best friend, Jay Hooker, an old racing friend, discovered the bodies and called police.

Robby Gordon declined comment on what happened until after he talks with the coroner, but said he believes he may know what occurred.

Bob Gordon, his son said, was instrumental in launching the careers of many young drivers including NASCAR champion Jimmie Johnson, who rode with Bob in off-road races.

"This is devastating," Robby Gordon said, fighting back tears. "He taught so many, and I want everyone to know what a good man he was."

Gordon said his off-road races at the Costa Mesa fairgrounds will go on as scheduled because of business commitments.

"And to switch from what happened to a business mode really stinks," Gordon said.

Robby Gordon has three sisters. One, Beccy, had a child Wednesday.

Robbie Gordon learned to ride horses at his family’s home in Orange. He learned to drive a car there, too.

But on Thursday morning, he stood in a driveway adjacent to that house – and fought back tears.

“The truth will come out,” the race car driver said in a short statement to reporters about the death of his father, “Baja Bob” Gordon and his wife, Sharon Gordon. 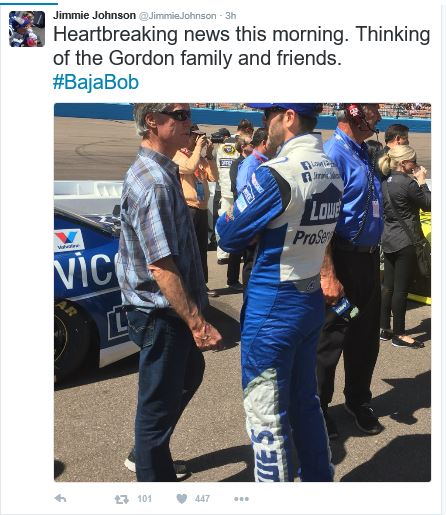 Dear Robby and family, So sorry to learn of your loss. Our love and prayers are for you at this time. With sincere sympathy, from Sweet Marie and Doug.

Sitting in a bar this AM, phone rings with the news-I spell my drink and drinking buddy asks whats wrong-tell him about Robby's shocking news, he says who's Robby, needless to say- no longer friend, sorrow and prayers to the Gordon family-RIP Baja Bob and wife....

so sorry for your loss, praying for your family