Capitalizing on what was once known as Mickey Thompson’s Off-Road Racing, Robby Gordon’s Stadium SUPER Trucks will feature high-flying off-road action motorsports fans have been asking for. The entire championship season will be broadcasted on NBC and NBC Sports Network, with the series awarding $500,000 to the Champion driver of Stadium SUPER Trucks.


“It has always been my dream to bring back stadium racing to the masses. I started my career winning a championship in Mickey’s series and now I want to revive his vision and bring back what the motorsports world needs. NBC Sports understands what kind of excitement and value our show will exhibit. This will be extreme wheel-to-wheel, door-to-door, roof-to-dirt racing action for all ages,” said Robby Gordon, President of Stadium SUPER Trucks. 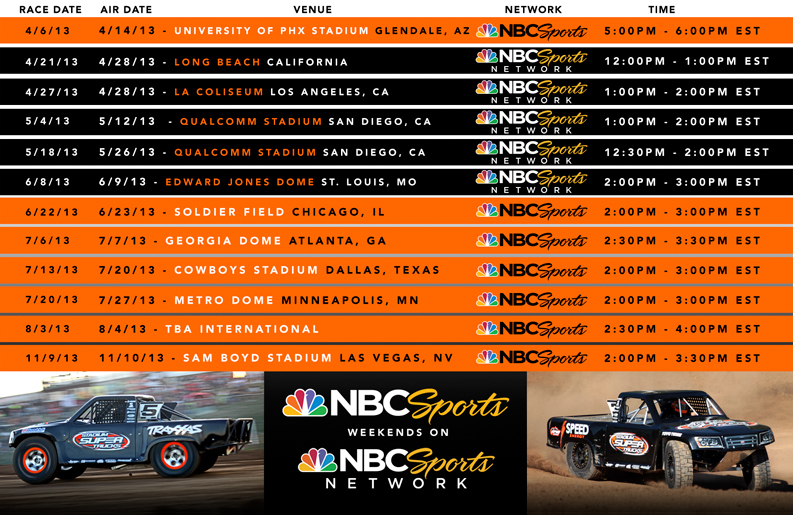 I will be at the chicago race for sure.

WOW! Not just NBC Sports Network, but the Mothership itself!? That's HUGE!

Many of us don't get the NBC Sports Network. I hope someone will record it and share with us.

I ll be more than happy too :)

Is Robby going to drive in the series? You would think there would be some questions if the president of the series won the title and the $500,000

Permalink Reply by Bricoop on September 18, 2012 at 6:36pm
Yes. That's why there's an independent body managing the racing. This is what NASCAR has failed at.