What happened during the Parker 425 this weekend is unfortunate and a huge disappointment for everyone involved with our Team, including Sponsors, Employees and Fans. Our racing program is not just a fun hobby - it is a business. I want everyone to understand that it's business and nothing personal against Casey Folks or anyone involved with BITD. We enjoy racing the series and feel Casey does a good job, and we're going to learn how difficult a job it is for Casey and other promoters in the very near future with Stadium SUPER Trucks.

We have a serious issue in regards to what Casey has said we did and what the rules allow. First and foremost, we want to hear the alleged recording of the radio communication with the helicopter. The rules specifically say "No aircraft permitted for the purpose of race support." We used our aircraft to film within the bounds of the Section 8 rules, which I have listed below.

Here is what the rulebook says in section SEC8:

The rule book does not say what this BITD official posted: 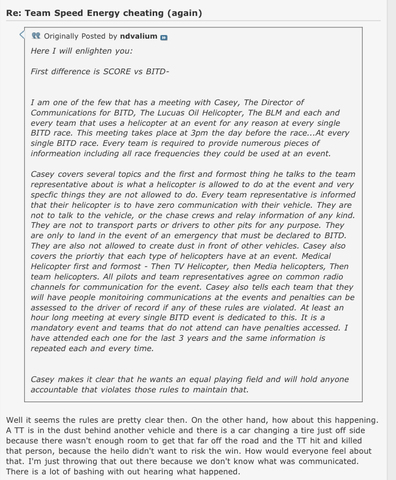 For most of the races, at some point we are the lead vehicle and I want them to protect innocent people, spectators, snow birds, motorcycle riders, atv's and quads playing in the desert that may not know there is a race going on, especially in Mexico, etc. Trophy trucks (Trick trucks, Class 1400) are the most sophisticated race vehicles in American Motorsports today. The rules are wide open with the class being Unlimited and it is inevitable that someday we're going to crash again and as fast as my trophy truck goes, it could cause serious damage and life threatening injuries. If the helicopter is there to service my team or other teams for medical attention it is making the sport safer.

Our helicopter has landed on multiple occasions to make sure that other competitors are okay when in distress. Last year for example, at Vegas to Reno with the Mastercraft trophy truck and this race our helicopter landed to assist a rolled over vehicle that was stuck in a ditch. Our helicopter did that not to help us win a race and not because we are somehow required to do so, but just because someone needed help immediately and our helicopter was there. I know the people in off-road racing, and I know that they would return the favor if we needed it. That is the way we operate.

Last but not least, we use the helicopter for video production.

Facts: Until we hear the recording that BITD alleges exists, according to our understanding of the rule book, we didn't do anything wrong. We will have to stand up for ourselves on this matter as I take great pride in this issue. This is our business and we support ourselves by winning.

We won this race.......and it's really a bummer that we have to defend the results.

Thanks for the continued support, see you at the next race.
-Robby Gordon

The public airspace was not closed by the proper authority (FAA) through a published NOTAM. I don’t understand why an aircraft cannot use it, just because the BITD series says so doesn’t give them the right to do so.
Granted, if it was used to assist the truck, it would be a rule violation, but just the fact it was in the air should not be punished since it is perfectly legal. If BITD has an issue with that, maybe they should file a complaint to the FAA.

May I make a suggestion that we all take a deep breath....Parker is done & over with. Robby is sitting 3rd - he was fast in his own TT.

I know I got his back.