Join in and discuss all the action from Stage 7 of the 2013 Dakar Rally. Robby Gordon recorded his 2nd straight 3rd place finish in Stage 6, moving up to 23rd overall. Gordon is still down over 5 hours in the overall, but will get yet another good starting spot in an attempt to win his first stage of the rally. The cars are slated to begin the special section of stage 7 at 10:51am/et and Robby Gordon will begin his special section around 10:56am/et.  Raceday chat will be available throughout the entire 2013 Dakar Rally. Raceday chat now works on the Ipad & Iphone.

The ascent of the Andes Cordillera will be in the small hours, taking all the drivers and teams in convoy for a liaison stage finishing at a record altitude of 4,975 metres, at the top of Argentina’s highest mountain pass. During the special stage, the needle of the altimeter will fluctuate between 3,400 m and 4,000 m, but the speedometer will rarely go below 100 km/h, despite the lack of power which will affect all the vehicles. Still on the subject of figures, at this time of the year and at the highest altitude, the thermometer will display an average temperature of 15 degrees. When all is said and done, the biggest difficulty will be for motorcyclists to maintain their stamina. They will be welcomed in a bivouac which has been relocated for the first part of their marathon stage. 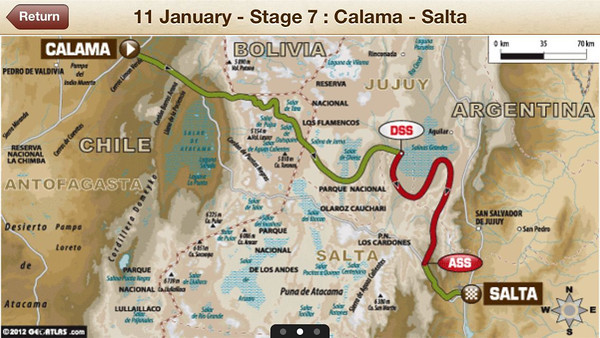 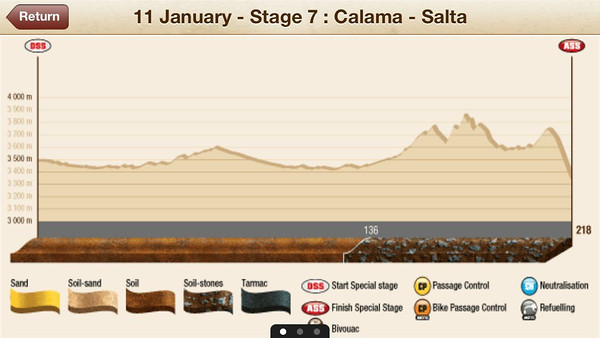 I hope they run the full stage, last year they cancelled it for weather. The altitude adds a whole different element.

Possible cancelation of this stage due to snow, organizers will decide tomorrow morning.

Yep I remember now. Thanks J.R

Permalink Reply by mj on January 10, 2013 at 9:38pm
Oh come on its snow . Any Western New Yorker worth his / her salt can drive thru it no problem lmao

I hope they don't cancel stages due to snow.

they need to race it!

They raced a bit in the white stuff in the Central Europe Rally.

Not to mention there was this even called the White Hills Baja Russia run last year as a FIA CCR World Cup candidate event. They may not do it due to the number of amateur riders, BUT it would be something!