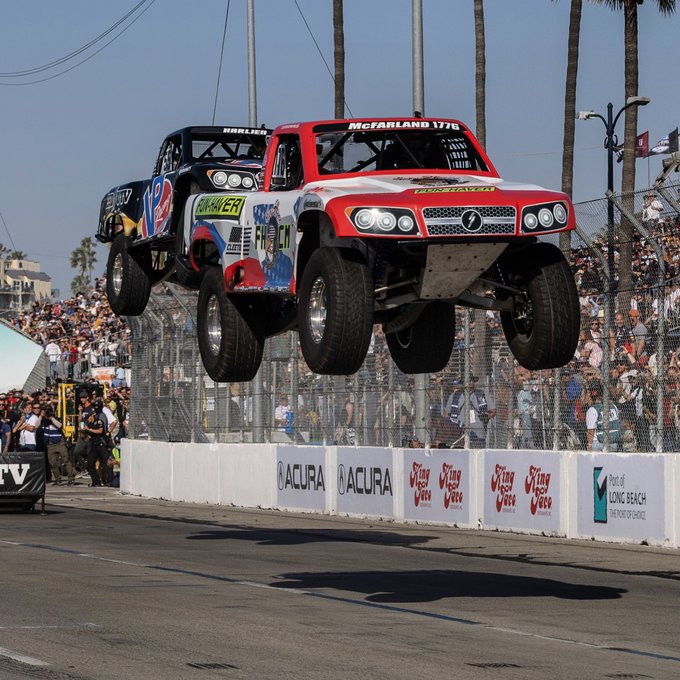 NOTE- Robby will be not racing, he is still in Asia.

Ok, not only is Cleetus racing at Nashville this weekend, but he also just announced this https://www.youtube.com/watch?v=HFmzAqB8E2w&t=46s

This weekend should be fun and interesting. Anytime Matty is in the seat, he could W, Garvin and Robert are Stout ;-)Maybe Mad Max will snooker them all, again.

he Stadium Super Trucks return to Nashville for the second annual Music City Grand Prix this weekend, and with them comes a grid of ten. While not the loaded thirteen from 2021, full-timers are joined by two returning names from the Long Beach season opener and a driver who has not driven a stadium truck in three years.

The carousel of Championship Off-Road Pro 2 class drivers now places Ryan Beat in the #51. He was the very first driver for Continental Tire’s SST programme, having débuted the truck at the 2019 Circuit of the Americas season opener with a podium in Race #1. With COR on an off-week between Dirt City and Bark River, he decided to make his return to SST after a three-year absence. Following his one-off at COTA, he scored the 2019 Lucas Oil Off Road Racing Series Pro Lite championship, his second in a row.

Beat will hope his SST run goes better than last weekend’s COR Dirt City outing as his Race #2 ended after being turned in the first corner of the opening lap. He is currently seventh in the Pro 2 standings with a pair of runner-up finishes at Antigo and Crandon. Jerett Brooks and Cory Winner, who are respectively first and second in Pro 2 points, have also raced stadium trucks in 2022.

After making his first start at Mid-Ohio, Ben Maier returns in the #67. The thirteen-year-old overcame spins to score fourth in both races and appear on the overall podium in third.

Coming back after last racing in Long Beach are Matt Brabham and Cleetus McFarland. Although Brabham told The Checkered Flag he doubted he could do SST on the same weekend as Indy Lights, the Nashville schedule accommodated both as IndyCar is sandwiched between them. The three-time SST champion notched fourth and second at Long Beach while he was second and third in the 2021 Nashville event en route to the title. Brabham will ride some cross-discipline momentum after nearly winning but still bitching a podium in Indy Lights at Iowa a fortnight ago and sits fourth in points.

McFarland nearly won in his maiden round when he led Race #2 in the final stretch before spinning out. Seeking to rebound from the agonising conclusion, he elected to join the Music City Grand Prix after initially planning to do the Ice Cream Cruise car show at I29 Raceway in Iowa. On Tuesday, the popular automotive YouTuber revealed SST will take part in his Bristol 1000 weekend at Bristol Motor Speedway on 3/4 September.

Stanton Barrett will drive the #F26 with sponsorship from local bar Tootsie’s Orchid Lounge, which appeared on Robby Gordon‘s truck in 2021. A longtime NASCAR driver and Hollywood stuntman, Barrett made his SST début in the inaugural Nashville GP by finishing eighth and eleventh. Gordon skipped Mid-Ohio as he was in Asia to develop his SPEED UTV brand, and he is not entered for Nashville to mark the first time that he misses back-to-back SST weekends.

Zoey Edenholm, Max Gordon, Gavin Harlien, Bill Hynes, and Robert Stout are the only drivers to have attempted every race in 2022. Stout, the current points leader, scored his first career win in Nashville Race #2 last year. Gordon finished fifth and fourth at the round while Hynes was ninth and tenth. Edenholm and Harlien did not race that weekend.

An exhibition is scheduled Thursday evening on Broadway as part of the Music City GP FanFest. Qualifying will take place on Friday at 4:45 PM Central Time, while Race #1 is on Saturday at 6:15 PM and Race #2 the next day at 5:05 PM.

I wonder if Cleetus is pulling a EJ Viso just to start from the pole?

Central-weather in area, aka rain, my favorite :-)