"The 34 (David Gilliland), he's a friend of mine, but he ran me over which ran me into Tony (Stewart) and that pinballed me out of there. It's disappointing. We had a top-five race car and ended up 16t. I'm very pleased, excited to be working with Dodge, excited about the Penske program. Unfortunately, Brad and I got caught up there earlier in the race. I thought we were going to be a good team together. We run good at Phoenix. I think we've solved a few of our problems, so I think we can have a good run at Phoenix.

Permalink Reply by Jay on February 22, 2011 at 2:37pm
Yes, it was too bad Robby got tied up with Brad. I hope Brad is accepting that as "one of those racing deals."

Permalink Reply by WJM on February 22, 2011 at 2:51pm
Brad Keselowski's post-race comment:
"It's just a late-race deal where everyone is just a little bit too aggressive to be pushing that hard," said Keselowski. "Robby (Gordon) did his best to try and help me move up. It's one of those deals where I had two packs of cars in front of me and I needed just a little bit of help. It wasn't Robby's fault. Our Dodge's worked really well together today and moved up to sixth or seventh and started to make a move. My Miller Lite Dodge Charger was really fast. We had a really strong car today. We just got caught up in a wreck."

Permalink Reply by Rob Hoban on February 22, 2011 at 3:09pm
Same thing as David and Robby. Just a product of Daytona racing. No harm intened and there shouldn't be any hard feelings either.

Permalink Reply by Randy on February 22, 2011 at 3:30pm
Hopefully he'll do better next week. Didn't get to watch the race, but I'm sure the 7 team did there best, Gas On Robby.

Permalink Reply by Slider316 on February 22, 2011 at 3:42pm
was I the only guy that about fell out of his chair when the #7 car not only entered pit road in 1st, he left in 1st also! That crew really dug hard all day long to keep the Speed car fast. and it was bad fast too. The 34 car showed it's lack of experience by pushing the 7 so hard in turn 1...the closing speed was ridiculous and the 14 look the low line away from the 7 and 34.

Quote of the day from RG: "I don't know guys....my head is spinning"

Permalink Reply by WJM on February 22, 2011 at 4:11pm
No, you weren't the only that fell out of his chair. The Penske hired guns were brilliant all day.

Had the 14 stayed in the middle, the 7 could have slotted in front of or behind the 14 coming off of turn 2. That coulda shoulda woulda been a top 5 finish.

Permalink Reply by Jaci on February 22, 2011 at 4:26pm
Was watching Monday's Nascar Now and Trevor said he really liked working with Robby because his bumper had been caved in so Trevor's car could get even closer to Robby's, create even more of a vacuum and he could push him like crazy. Also because the bumper was soft he didn't have to worry about getting him in the situation that Trevor would turn him. Pretty cool to hear as I wouldn't think that drafting would work even better with a messed up rear bumper. 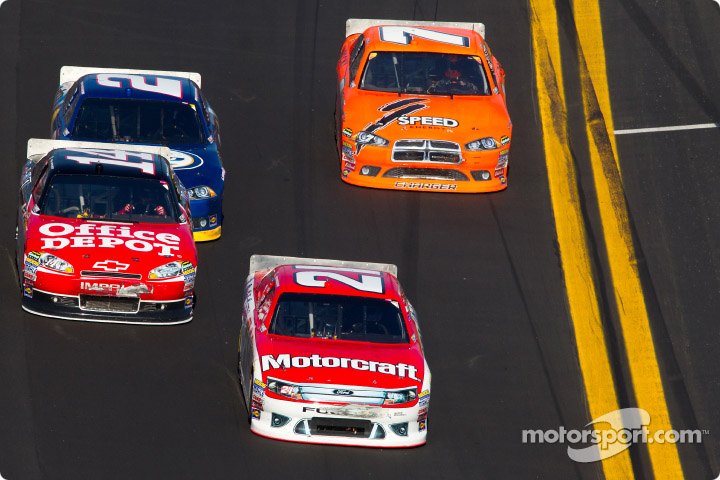 2019 Off Road Motorsports Hall of Fame