My kids introduction to riding

My 4 year old son Dylan has been hounding me to get him a dirtbike. After all, he and his 8 year sister Madison have basically spent their summers camping at one track or another, and their grandpa (my father-in-law) has had his own track at his farm since they can remember, my son expressed an interest in riding. So we went out and bought him a used PW 50 a couple weeks ago.

The weather here in Minnesota has been rather fickle for spring (it snowed 4-6 inches here earlier this week) so until yesterday we didn't have good riding conditions. But Friday conditions were right, I didn't have to work, and I thought it was time. So we brought him out to the farm and let him sit on the bike again and watch his grandpa and I ride the track. We figured that would encourage him to want to ride around the yard. So wrong on that. Apparently he lost his nerve. While getting the trailer loaded for his race weekend we thought that if I brought the bike home and let his sister ride it that would light a fire under him to ride.

Madison has never expressed any sort of interest in riding but we figured that she could ride it. So when she got home from school I asked if she wanted to get on it. Yep... and after explaining a little bit of the basics to her she was off and riding. She's a natural. We couldn't get her off the bike. Even so, Dylan still didn't act like he wanted to ride...

I think I am going to have to break down and get him training wheels. Really didn't want to do it since he is so good on his pedal pusher but apparently I gotta build his confidence a little. Likely he'll only use them for a couple days. But now I have another problem... I gotta find a bike for her :) Now we just have to get him to ride it 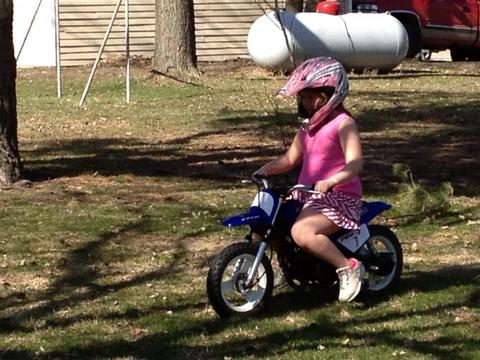 Pink skirt and all.. we made her change to pants later

Awesome, great way to bring kids up today. All three of my Sons have rode since they were young. Joe rode his TT125 for a couple years and moved on to other stuff. Tyler on the other hand rode his XR100 until he sold it, and got a KTM250. Ya I know, a couple of crashes later he was on the rear tire all the time. Tyler started to race at a local level and bought a YZF250. Then it was off to the Coast Guard like Joe his brother. Justin rides kinda. More of a computer nut now. Thanks for the share Kevin.

Good stuff Kevin, thanks for sharing

You may want to try this: All my sons have grown up around motorcycles. When my middle son, Trey, was 4 I got him a Suzuki JR50. He would sit on it but was afraid to ride it. I figured out what the problem was; it was sensory. The engine noises, vibrations through the footpegs, handlebars and seat scared him.

So I nosed the bike against the bumper of the car and put a block of wood under it put the bike so the rear wheel was off the ground. This also allowed the bike to balance upright by itself. Then I had him sit on it just to feel comfortable. Then I started it and he sat on it at idle just to get accustom to the noise and vibrations.

Soon he started playing with the throttle, revving it up. It only took about 30 minutes. Once he got used to it we would pretend he was actually riding it. Go, coast, brake, "scary scary" hit the kill button and lock down the brakes. A couple of hours later he was riding. Then I couldn't keep him off of it. Trey's 12 now and races 125 vintage (when girlfriends aren't in the way) and has taken over my '80 Husky 390 as his favorite everyday messin' around trail bike.

I like WJM's story, sounds like a great method to me. If you really want to try the training wheels for him to learn the throttle and brake control pm me your address and I will find a box. Bolt pattern on these is for PW and XR/CRF, they have been passed around for years and both wheels are bent, but they only ever get used for an hour or so by each rider. I really think it would be best to try WJM's method first though, these wheels got bent because they don't belong on a motorcycle. 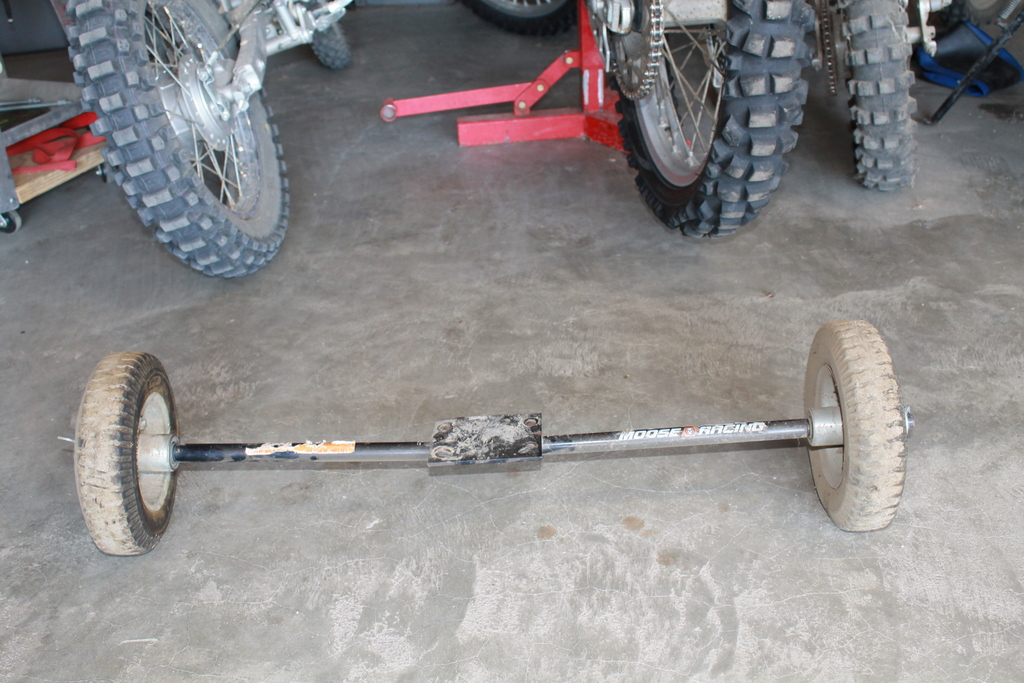 I think you are right. I am going to try WJM's method later this afternoon. I guess I am not in a hurry with it but think he will have fun once he tries it. Thanks guys.. I will post updates.

On a secondary note, my Dad found a Manco 810 go-kart for the kids... anybody know anything about them?

I remember the first time I rode a bike, a 1975, XR75, which my dad bought for coincidentally $75. After watching my brother do a wheelie and letting the bike go by itself into a ditch, I decided it was my turn. I stalled it twice, my dad looked disappointingly at me and was about to give my brother another shot. I twisted the throttle and off I went. Greg had to wait about 20 minutes for another chance. I want to get a bike for the kids, but with the attention spans they have, I don't think it would go well.

Many of life's larger lessons are taught not by lectures, but rather by the time spent learning something like riding and maintaining a motorcycle with your father. Don't wait too long, because they will be grown before you realize it.

We had to bite the bullet and cave and get Dylan dirt bike training wheels (Thanks Will!). Baby steps I guess. My daughter just wants to jump on pin it and race right now. I'm going to have to get an AMA card for her :) I suppose it has a lot to do with the age.. he will be turning 5 in June, she is 8. He was able to ride around in the backyard a little last night and wants to again today. Just going to take it easy with him and not push him. What I am most impressed with is he wanted to know how the motor worked and what everything was... 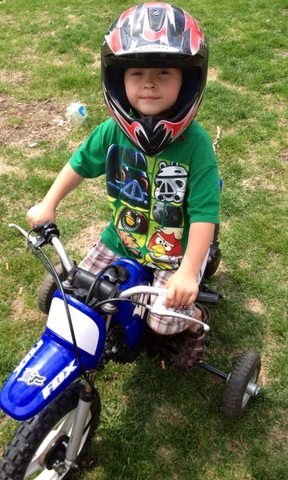 AWESOME!!! Way to go Dylan and Dad !
Kevin, show Dylan how he will be exiting corners in just 14 short years like my little boy Matt. 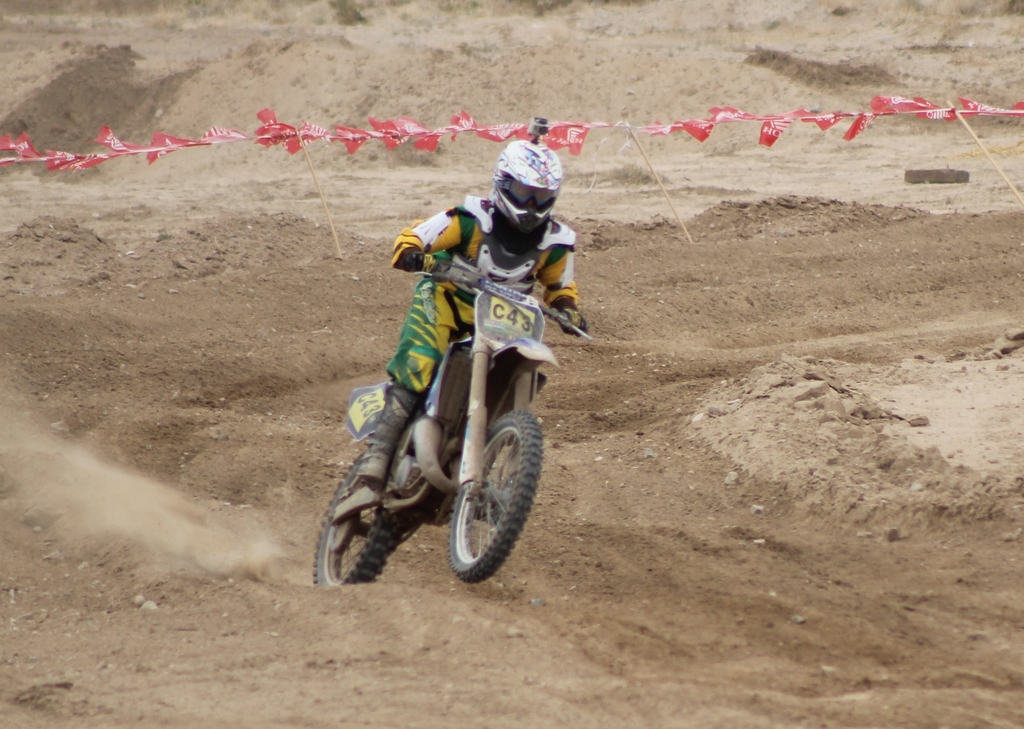 That's from this past weekend in Primm Nevada, not the best of his results due to a crash in the rock gardens. But with starting them at Dylan's age we get competent riders. It will seem like it was only yesterday when Dylan say's "hey Dad us guy's are going to be riding at a fast pace, are you sure you don't want to find someone your own age to ride with?"

Update: My daughter is going to be running her first race at Spring Creek MX in Millville on June 30th. I have been holding off on letting her race until she fell down a few times and was able to accomplish restarting the bike afterwards. I want her to run a couple races to figure out if we should get her a KX65 this year or next and let the PW revert back to being my son's bike only. I can't wait. On a separate note, check out what I have had the chance to play with lately: 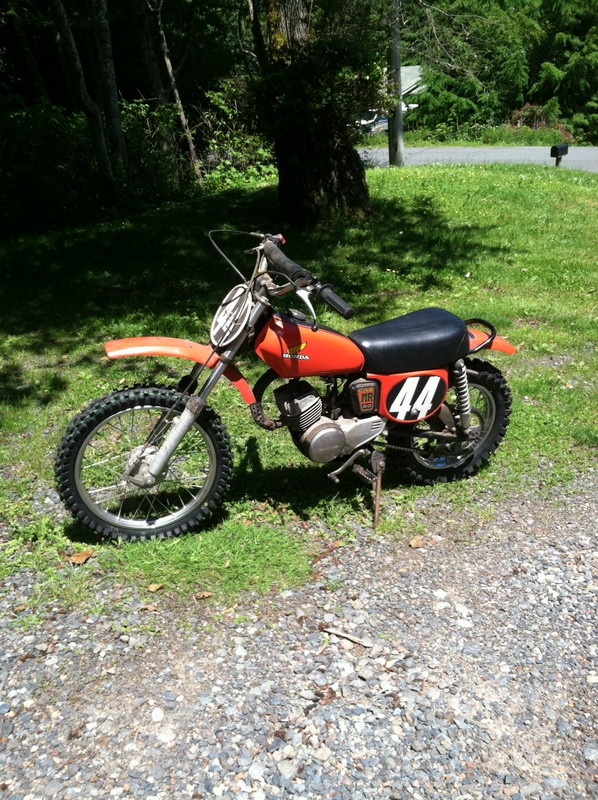 'Michelle's Ride' MR50. Just waiting in her to get big enough.