Robby Gordon will race this weekend at the Sand Sports Super Show in Costa Mesa, CA. If you can make it out, please do and show your support! Doors open at 5:30pm, racing begins at 7pm. Kids 12 & under get free admission with paid adult (Friday race only!) 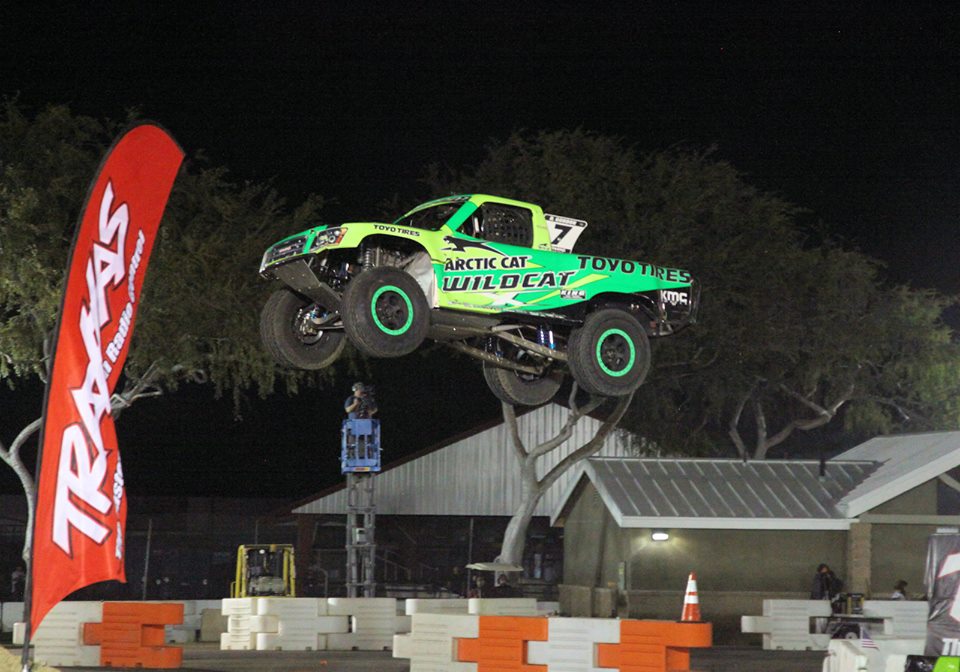 PJ was subbing for Pat O'Keefe

Probably the best thing for him right now, Race and Keep Busy.
And Winning also helps.

Thanks Mike for the update

Costa Mesa, California (September 16, 2016) – On a night where 11 Stadium SUPER Truck (SST) drivers returned to the series’ roots in Southern California, it was Robby Gordon who came out on top besting P.J. Jones at the OC Fair and Event Center Friday night.

After a series of single truck qualifying runs and heat races, Friday’s 20-lap main event– which featured the entire field of SST’s on DOT approved Toyo Open Country A/T II tires saw TRAXXAS driver Matt Brabham from Surfers Paradise, Queensland, Australia jump out to the early lead after the land rush standing start. Brabham would remain in that position until getting pressure from Orange, California’s Robby Gordon whom muscled his way past truck after truck to the front of the field. Brabham would hold off the hard charging Gordon for multiple laps until Gordon would opt to take the joker lane late in the event and slip past Brabham by a near bumper.

The last lap would see Brabham trying hard to get back past Gordon, but would come up short as P.J. Jones substitute driving for Pat O’Keefe in the SafeCraft Safety Systems truck would quietly work his way into contention and make contact with Brabham moving him out of the way.
Gordon would go on to win the event ahead of Jones, and the third finishing Brabham.

Sara Price of Canyon Lake, Calif. racing in front of many hometown friends and family in the her United Fiber and Data/BitTorrent truck would remain patient throughout the event running her own race. A late race mishap by Arie Luyendyk Jr. would allow her to capitalize on the position. Price would go on to claim her best SST finish to date in the fourth position.

Back in the Royal Purple Synthetic Oil colors this weekend Arie Luyendyk Jr. of Scottsdale, Ariz. would run with the top four competitors majority of the race until contact with the retaining wall with four laps to go would allow Price to slip by. Luyenkdyk would be credited with the fifth position.

Norwell, Queensland, Australia driver Paul Morris would find trouble with six laps remaining putting his United Fiber & Data No. 67 truck on its roof thru the treacherous sand pit. In typical SST fashion track officials rolled the truck back over and Morris was able to continue the 20-lap event finishing in the sixth spot.

Short course ace Kyle LeDuc of Beaumont, Calif. driving the Toyo Tires/ 4 Wheel Parts truck would battle power steering issues all night. As the SST technicians would thrash to get it fixed for the final, Leduc would run Robby Gordon’s Arctic Cat/ Toyo Tires truck in the qualifying heat. Adapting quickly to the challenging course configuration of the Costa Mesa track in his own truck for the final Leduc would race to finish respectfully in the seventh position.

2016 SST World Championship points’ leader Sheldon Creed of Alpine, Calif. would quickly race out to the front of the pack and challenge for the lead but a broken axle would damper that effort suddenly. Looking to gain as many points as he possibly could Creed would limp his battered and bruised TRAXXAS truck to a eighth place finish.

Returning to the facility where he made his first SST start in 2014, Bill Hynes of Nazareth, Penn. would drive a consistent and smart race to finish the United Fiber & Data truck in the ninth position.

SuperKart driver Troy Diede of Lodi, Calif. making his first ever SST start held his ground early in the main event as he quickly raced out to the early lead from his first starting position. Laying down consistent laps Diede would find himself running in the top five for majority of the event until contact with P.J. Jones would spin him around losing valuable track time to the leaders. Staying out of trouble for the entire race Diede successfully finished his first SST race in the tenth position.

After having various scheduling conflicts the last few months Tyler McQuarrie of Walnut Creek, Calif. left off right where he did the last time he sat in his SafeCraft Saftey Systems Stadium SUPER Truck. The tight and narrow corners of the temporary Costa Mesa track suited the driving style of the professional drifter as he ran in the top three majority of the main event before mechanical failure forced the ultra quick driver out of competition. McQuarrie would be credited with the eleventh position. In other Sand Sport Super Show news-
Our series partner Arctic Cat - ATVs will have a LIVE interview TODAY at 2pm/pt with Robby Gordon and Taylor Snyder. They will talk about the new Wildcat X, featuring RG Pro Suspension!