Robby Gordon Road To Dakar: One American's Quest to Capture the World's Most Demanding – and Dangerous – Sporting Challenge 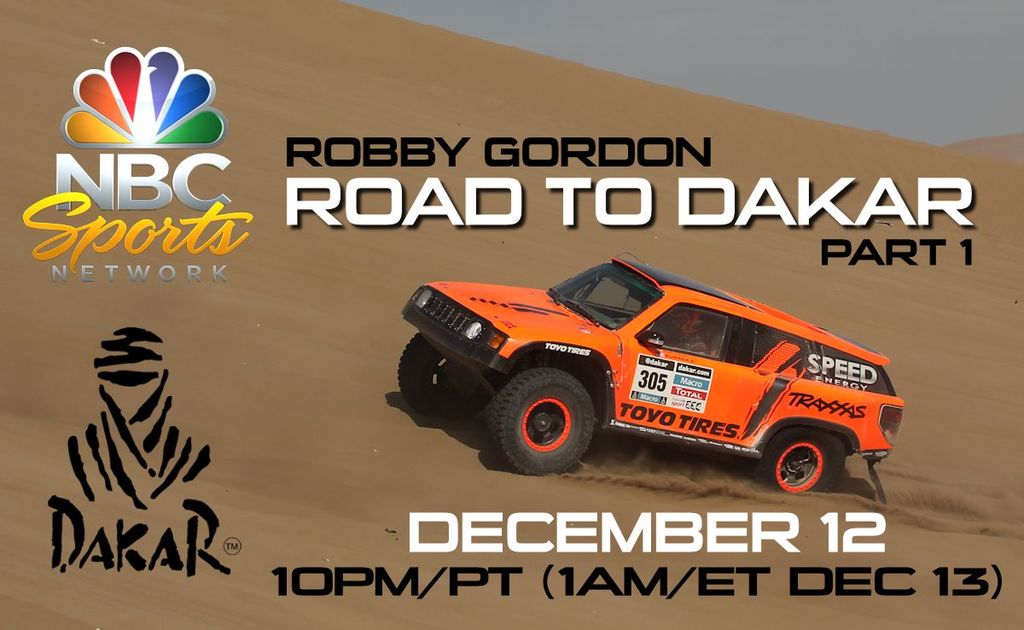 CHARLOTTE, N.C. (December 10) – The world is full of sporting events and challenges that make most bystanders and observers question the sanity and admire the tenacity of individuals that undertake seemingly impossible and death-defying feats:

- The Ironman World Championship in Hawaii is widely considered the most physically challenging triathlon in the world with a 2.4-mile swim, 112-mile bike and 26.2-mile run making up the grueling race;

- The 24 Hours of Le Mans sports car race in France is one of the world’s most demanding challenges with non-stop twice-around-the-clock racing pushing competitors and cars alike to the brink of failure;

- The running of the bulls in Pamplona, Spain is regarded as one of the most dangerous activities on earth having had 15 people killed since 1910, most from the sharp horns of bulls goring runners as they race down city streets.

For American Robby Gordon and members of the more than 400 teams that will start the annual Dakar Rally on Jan. 4 in Buenos Aires, Argentina, with 9,938 scheduled kilometers of racing ahead of them through unknown deserts, along sheer cliffs and through towns and villages in South America they have never heard of, much less seen, the challenge of competing in an event that lasts one day or less like those listed above seems like child’s play.

Yes, the world is full of challenging adventures and competitions, but there is only one Dakar Rally.
Like all automobile races, the Dakar Rally requires tremendous preparation to succeed. However, unlike any other car race, teams will compete and work literally non-stop every day except one from Jan. 4-17 through mountains, deserts, sand dunes, peaks, valleys and otherwise the most desolate spots on earth. Gordon and his rivals will be given one day of rest – Jan. 12 – by the sanctioning body ASO. While the day of rest will give drivers a much need break from the 120-degree temperatures they are sure to face in the summer of the southern hemisphere, it will be anything but a relaxation for the more than 30 team members – including Gordon – who will effectively tear apart their race car prepping it for the remaining five days of racing. This same maintenance and preparation will not be limited to the rest day, it takes place every day and night of the Rally.

In addition to the Dakar Rally, the ASO owns and operates the famed Tour de France, so it is fitting this race is often compared to the brutal bicycle race. Instead of the grueling climbs on paved roads through the postcard-perfect European countryside, once the Dakar Rally leaves stopping points throughout Argentina, Chile and Bolivia, competitors will race on their own through the most dangerous terrain on the planet not knowing when or if they will finish the day’s stage or if they will be fortunate enough to begin again the next day.

Racers are legendary for not discussing death, but it is inevitable at Dakar. In its 35 years, 27 competitors have lost their lives challenging the elements and each other in pursuit of glory that more than 1 billion global spectators witness each year on television or in person in South America.

Countless more have been injured causing withdrawal from the event. In 2014, of the 434 teams that started the Dakar Rally in car, motorcycle and truck classes, only 47 percent of teams finished. Some faced mechanical challenges, others simply gave up as the challenge overwhelmed them.

For Gordon, engine failure sidelined the SPEED Energy/Traxxas/Toyo Tires team, which has made the Californian known as perhaps the world’s greatest off-road racer more determined than ever. He will roll to the starting line of the race he most wants to win for the 11th time in January. In his first attempt at Dakar glory in 2005 he became the first American to win a stage in the famed race, and has since won a total of nine as a driver and 11 as a car owner. His goal remains to capture the overall title thus planting the Dakar Rally flag in America for the first time in its history. He finished third overall in 2009.

“This race is the Indy 500, Daytona 500, 24 Hours of Daytona and the Baja 1000 all rolled into one, and then some,” Gordon said in describing the race. “I have been fortunate to race in nearly every great car race in the world, including all of these, and nothing compares or can prepare someone for the Dakar Rally before they show up the first time.

“It’s just a reality that people don’t understand,” Gordon states in the opening seconds of the documentary. “They have no clue what this race really is. It is three or four seasons of Baja… all packed into 14 days. Logistics, parts, preparation, man hours, things that you need to do to prepare for this race – people have no idea what it really takes.”

The two-part Robby Gordon Road to Dakar: One American's Quest to Capture the World's Most Demanding – and Dangerous – Sporting Challenge will air Dec. 12 and 24 on NBCSN at 10 p.m. (PT) – (Dec. 13 and 25 at 1 a.m. ET respectively). Gordon’s hope is that American’s who until now have not been exposed to the great race will begin to understand what in fact it takes to compete and will gain the appreciation in the United States that the race enjoys throughout the rest of the world.
The NBCSN documentaries will provide behind-the-scenes access and the year-long rarely seen testing, logistics, engineering and construction of vehicles by more than 30 individuals at Robby Gordon Motorsports. Gordon leads his team to meet deadlines in order ship their race cars, support trucks, transporters, parts and equipment from Charlotte, N.C. to Buenos Aires on time and on budget.

NBCSN will again provide daily highlight packages of the 2015 Dakar Rally following the opening stage on Jan. 4. Check local listings for times of the NBCSN programs.

Gordon’s progress can be followed live throughout the Dakar Rally by visiting www.dakar.com or www.planetrobby.com, the latter of which is a fan web site the includes discussions boards, personal updates from those following the race in South America and updates on the challenges and off-track obstacles Gordon will inevitably face throughout the race.

My Uverse for Charlotte, NC also has it on channel 1640 for HD at 1 am. It is listed as Robby Gordon's Road to Dakar and only slotted for 30 minutes with the Jimmy Houston's Outdoors coming on afterwards at 1:30 am. I just set my DVR to record an extra hour after the first 30 minutes so hopefully I'll get it all regardless of how long it is!

Permalink Reply by Mike Kenyon on December 12, 2014 at 11:18am
Exactly, plan for an hour.
PST folks should be able to watch during the airing,unless your old at heart

Nothing has changed with the Comcast listing. Still an hour. 10 to 11 tonight Speed Energy Formula Off Road Series.

is anyone having trouble viewing the DAKAR teaser video..

If you miss the episode on the television machine, we'll most likely have it available here after it airs.

Permalink Reply by WestCoast 2 VV on December 13, 2014 at 2:10am
First Class all the way, all business. The reward will be sweet when it's all said & done. Great camera work, producing..
Like Shawn said, the planet and all those following this top notch program know all the dedication by Robby & crew, now it's time for the rest of the world to see the results of the labor. Great program, getting the word out...Speed Energy, Toyo & Traxxas..top tier sponsors.

Awesome show. Hopefully those outside Planet Robby can now have a deeper appreciation for RG and RG Motorsports. Gas On Robby!