Look who picked up the monster sponsorship for dakar.

This could be a dark horse. I remember back in the days when dakar version of Peugeot 205's used to rule the dakar race. Mini with the same power plant as the x-raid team will have an awesome power to weight ratio. With mini joining WRC in 2011, this would be good start to their motorsports campaigne3

Details
Team X-Raid has prepared a surprise for the 2011 Dakar: Guerlain Chicherit will have the responsibility of using a purpose built Mini for rally-raiding for the first time, which is based on the BMW X3 CC that his team mates will still compete with in Argentina and Chile.
Guerlain Chicherit’s car missed the Le Havre rendezvous for the loading on to the ship headed to Buenos Aires. That mystery has now been solved with his team’s announcement of a new model: the Mini AII4Racing. While the project was first taken under consideration by Sven Quandt in 2009, the actual construction of the car at the Trebur race ship didn’t begin until November. This speed record set by the Mini doesn’t scare the team manager, who believes it will be competitive right out of the box. “It will have the same engine as the 2011 Dakar BMW X3 CC, which is to say that it will have added power (315bhp) compared to the version that finished fourth and fifth on the 2010 Dakar”, said Quandt.
Guerlain Chicherit, who will now team with Michel Périn, also believes in the potential of the little gem Team X-Raid has entrusted in him. “It is an unprecedented and extremely motivating project, I can hardly wait”, says the very enthusiastic Frenchman. For now, a test session has been scheduled for December 13 and 14 before the Mini All4Racing is air freighted to Buenos Aires, where the final adjustments will be made prior to scrutineering. 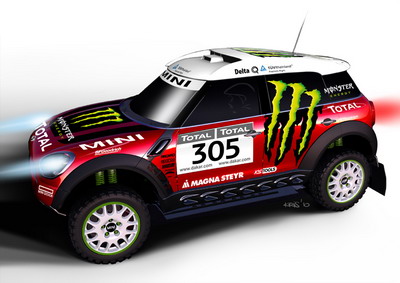 This was in the dakar group last week. Thanks.

With Peugeot back in and Nissan / Belgium just signed Nani Roma and his long time navigator this Dakar is gonna be better than ever, I hope. Love those dark horses.