Join in and discuss all the action from Stage 5 of the 2013 Dakar Rally. Robby Gordon looks to rebound after rolling the Hummer is stage 4. Gordon is now down over 5 hours in the overall and will try to win as many of the remaining stages as he can. The cars are slated to begin the special section of stage 4 at 11:25am/et and Robby Gordon will begin his special section around 12:30pm/et.  Raceday chat will be available throughout the entire 2013 Dakar Rally. Raceday chat now works on the Ipad & Iphone.

A relatively late start will allow the slowest competitors to make up for time lost the day before, as well as to cope with the time change which has been scheduled. For this transition stage which will see the rally enter Chile, the contrast will be visible both in terms of the variety of scenery and the average speeds recorded at the finish. The tracks taken by the motorcyclists will take their toll on their arms: the environment is favourable to attacks, but the stony sections and the rivers to be crossed in some areas will curb their enthusiasm. Those in four-wheeled vehicles will also criss cross between the first reliefs, from valley to valley, with the eyes of the navigators glued to the road book. 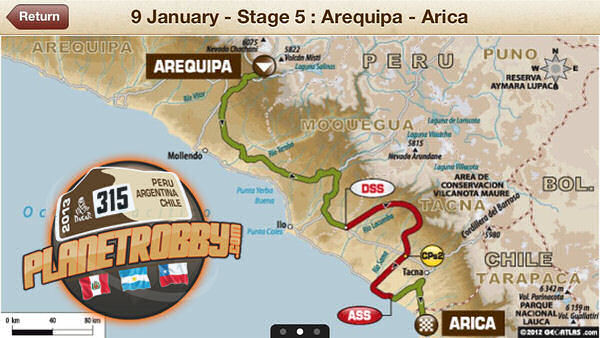 +1 this is dakar do not forget that of the 400+ entry's most everybody's goal is just to finish and hundreds.. wont even do that. i am sure robby and the team have a plan working .still only stage 5 top 5 overall not only possible but probable when its time to give up on finishing up front at any point then fill the back with some extra cases of speed to give out ,grab some extra tow ropes and spend the last few stages just helping all the little guys out there just trying to survive

Permalink Reply by Adam G on January 9, 2013 at 9:24am
I think everyone is happy with the hummer buddy

Permalink Reply by Bruce Braithwaite on January 9, 2013 at 7:19am
Hey Americanos I see RG heard GDV coming and the hummer decided to lie on its back like a submissive puppy. I watched the Toyota Hilux taking the same dune and it was like watching a G6 coming in to land as smooth as an inner thigh RG has the mad skills but now he needs a Toyota Hilux Bakkie to match his skills and then he will start winning we can start the build today we even have orange paint in stock. We can even include the idiot co dog that got GDV lost in the price .
I hope RG does not throw in the towel can you imagine watching the Dakar without at least one racer with a personality

Fucking Hi-lux VS Hummer???? You my friend, are we we call "special needs".

Now now; don't disregard the Hilux. Yes; it does't have the suspension height of a buggie, but it's more than capable in the right hands. That special needs comment was uncalled for.

Haha.....That was a lot of restraint for "Fly" I thought. Getting mellow in his old age ;)

+1 Nice one! :) If he was racing he Dakar he'd be running a modified short-bus and slobbering on himself.

Bruce is in South Africa and the short bus deal probably doesn't have any meaning, just say'n
everybody has there favorites, Thankfully Robby is Bruce's son favorite

Howzit bro, the thing is with special needs the one who is lying on their back waiting for someone with a special vehicle in order to get them on their wheels again and the other racing past on all four wheels only waiting for the finish line we need to revisit the definition of special needs. the onlt time the HILUX needs any assiatance is to haul all its trophys home . We will bring our Hilux to the USA and run it in reverse to give you a chance of catching us. this is all in good fun so I hope you are not getting your knickers in a twist