Join in and discuss all the action from Stage 2 of the 2016 Dakar Rally. Robby Gordon will drive the #312 Speed Energy/Traxxas/Toyo Tires Gordini, and his teammate, Sheldon Creed, will drive Gordini #337. The special section of Stage 2 has been shortened from 521km to 387km. Robby Gordon start time: 9:11am/et, Sheldon Creed start time: 9:16am/et. Raceday chat will be available throughout the entire 2016 Dakar Rally.

The statistics speak for themselves: with around 800 kilometres to cover depending on the category, the day will be very long. There is a significant distance to cover in both the special and the liaison sections: although the terrain presents no real difficulties, the relatively fast tracks may already benefit those who love hills and crossing rivers and who can keep up high speeds over the whole distance. Cars and trucks are entitled to an extension on this day. 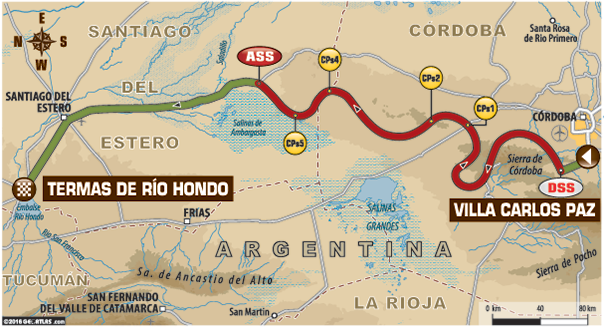 This is the 2wd rule:

2) 2-wheel drive T1 Vehicles must use tyres from a tyre manufacturer’s commercial catalogue.

Correction here is the pattern rule:

The pattern of the FRONT and REAR wheels of vehicles presented during Scrutineering must be the same during all the Rally for all categories.

RG footage at the end
https://www.youtube.com/watch?v=qjNWrkmniXs

Correction here is the pattern rule:
T2P2 TYRES
The pattern of the FRONT and REAR wheels of vehicles presented during Scrutineering must be the same during all the Rally for all categories.
But is that same tire on front as rear (so no paddle tires etc during separate stages) or is that same tire shown at scutineering. This darn French to English rule book is confusing.

Thanks for the clarification.

Lots of penalties handed out. RG 20th now What was the 1 minute penalty for Sheldon?

TERMAS DE RIO HONDO, Argentina (January 4, 2016) – After a cancellation of the first stage on Sunday due to inclement weather, Americans Robby Gordon and Sheldon Creed would roll their identically prepared SPEED Energy/Toyo Tires HST Gordini supercars to the starting line and take the green flag of Stage 2 on Monday morning.

However, like the previous day it was known right away that weather would play a huge factor in the outcome of the stage as Rally officials would shorten the special from 521 km (323.7 mi) to 387 km (240.5 mi) as the risk of low lying clouds and darkness would threaten to ground safety aircraft during the later moments of the year’s longest special.

Dealing with a hilly rain soaked course with over flowing streams and rivers, Team SPEED knew they would have their work cut out for them in the first challenge of the 38th Annual Dakar Rally.

Starting in the 29th position Robby Gordon broke out to a blistering pace working his way up to the 15th position by km 120 just 3 minutes and 51 seconds behind leader Sebastian Loeb. But like any form of racing qualifying in the front has drastic advantages, especially in off-road racing, and today was no different as competitors who started further back dealt with a chewed up race course.

Shortly after the km 170 mark Gordon would find an obstacle that was too just much for the SPEED Energy / Toyo Tires / TRAXXAS HST Gordini to bare as it came to rest stuck in a thick bog of deep mud. While Gordon and Navigator Kellon Welch accessed and worked themselves out of the situation, 15 minutes were lost to the leader once back on course and moving.

Gordon would go on to finish Stage 2 in 4 hours, 3 minutes and 22 seconds, 17 minutes and 17 seconds behind the time set by stage winner and overall leader Sebastian Loeb of France who finished in a time of 3 hours, 45 minutes and 46 seconds.

“Things were going really good today, and we just got stuck, it’s very unfortunate to give up all that time to the leaders,” stated Gordon after Stage 2.

With 11 stages remaining Gordon has plenty of time to make up as much of the 17 minute and 17 second deficit as possible, and try to add to his impressive ten career stage victories throughout his 11-year Dakar career.

Some great photos from the mud hole