NEW YORK (CNNMoney.com) -- General Motors Corp. said Tuesday that it has signed a deal to sell its Hummer truck unit, just one day after filing for bankruptcy.

But GM (GM, Fortune 500) would not identify the buyer nor name a price, saying only that the deal would close by the end of September.

So is Robby gonna be driving a Russian or a Indian hummer next dakar?

Permalink Reply by Turtle7 on June 2, 2009 at 12:25pm
The Hummers are built in the same plant as a couple of GM Full Size SUV's. I wonder if the Hummer volume will keep the plant competitive as I would not be surprised to see GM cut production of the other vehicles. Also, what will the dealer network look like for the Hummer? 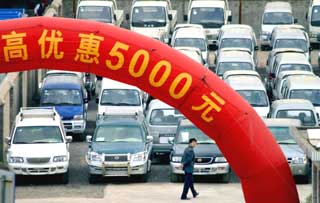 Permalink Reply by Keith on June 2, 2009 at 12:36pm
CNBC reporting that HUMMER has been sold to the Chinese.

Permalink Reply by Team Maranello on June 2, 2009 at 12:49pm
From the New York times. I am not feeling too excited about this but hope it all pans out for Robby. I hope he still has a GM power plant, cant image a chinese built engine in a rally raid.

The Sichuan Tengzhong Heavy Industrial Machinery Company Ltd., based in Chengdu, concluded the agreement with G.M., said the person, who insisted on anonymity.

Sichuan Tengzhong is a privately owned company, but Tuesday’s deal required preliminary vetting by Beijing officials, who retain the right to veto any effort at an overseas acquisition by a Chinese company and who give special attention to deals over $100 million.

Permalink Reply by brian campbell on June 2, 2009 at 1:31pm
NOW WE CAN BUY ARE MILITARY VEHICLES FROM A FOREIGN COMPANY