stage 11 cars
16:13 Number six for Al-Attiyah!
Nasser Al-Attiyah has picked up his sixth stage success of the year! Although he trailed by up to almost 3’30’’ during the special, the Toyota driver maintained a sufficient pace to pip his rival Stéphane Peterhansel at the post. However, Al-Attiyah still trails the Frenchman by quarter of an hour in the general standings…

stage 11 SXS
15:13 Quintero and Meeke are neck and neck
Seth Quintero has regained the lead on the special from Kris Meeke after 215 km, but the two rookies are only separated by 30’’. Sergey Karyakin remains in third place, more than three minutes behind. General standings leader Chaleco López has climbed into fourth place, almost six minutes behind the stage leader. For the moment, “Chaleco” is holding strong!

How Much Does It Cost To Race the Dakar Rally? with Skyler

Permalink Reply by Barb on Thursday

Thanks for posting the link Mike. 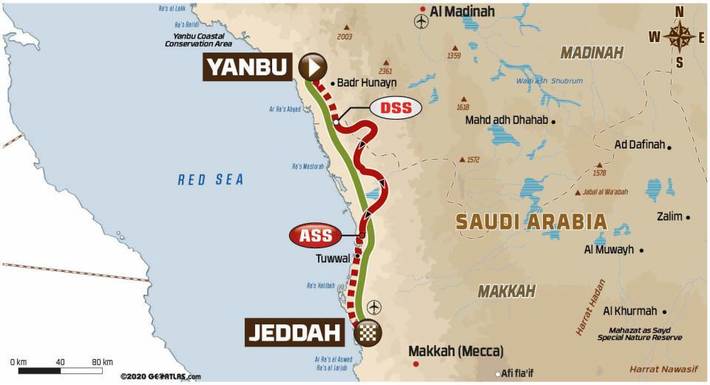 The last stage was a parade basically historically, until Robby. Stage 12 might be a run like a sprint race, game on.

FYI, Yesterday mostly ( Tuesday late 1/12-1/13 ) I was on generator power until early this morning (Thursday) but worse - no inter-web. Luckily, I have DTV, so I knew there was no political thing going on. But I was not able to post yesterday's info.

Sorry to hear Mike. Thank You for all the posting with updates ! I've been catching it when I can

Dakar .... If it was easy everybody would do it.

stage 12 motorbikes
08:59 Brabec goes on the attack
At the first WP, Ricky Brabec leads the stage, regaining one minute on Kevin Benavides. Matthias Walkner is third more than three minutes behind. As for Daniel Sanders, he trails by more than six minutes. Pablo Quintanilla, second yesterday, has conceded more than 13 minutes. This last special is already difficult for some riders.

10:01 Benavides wins the 43rd Dakar
The last special has proved to be a formality for Kevin Benavides! The Argentinean, who had to open the way after overtaking Sam Sunderland, rode at a lightning pace until the finish in order to combat a charge from Ricky Brabec. The two team-mates have enabled Honda to take the top two places on the final podium!

10:06 The first one-two finish for Honda since 1987
Before today, it was as long ago as in 1987 when Honda last achieved a final one-two finish on the Dakar. That year, Cyril Neveu claimed the crown ahead of Edi Orioli. Franco Picco, who is still racing today, finished fourth. It is a historic Dakar for the constructor with the winged logo!

Good on Ricky and Skyler