stage 9 cars
16:08 Peterhansel wins and increases his overall lead
Following Mathieu Serradori’s mechanical problems, Stéphane Peterhansel has inherited the stage victory which is his first this year. What’s more, the Frenchman has also opened up a gap in the general standings. He now has a lead of almost 18 minutes over Nasser Al-Attiyah. With three stages to go, things are looking rosy for Peterhansel.

stage 9 SXS
15:09 López is aiming for three in a row
After winning both parts of the marathon stage, Chaleco López is today attempting a hat-trick. After 239 km, the Chilean is one minute behind Michał Goczał. Former WRC driver Kris Meeke is in third position, 2’26’’ behind the stage leader. After time losses yesterday, Aron Domżała has now lost almost five minutes!

15:50 Big blow for Quintero!
Seth Quintero, who led at the start of the special, has broken down after 210 km. The youngest ever stage winner on the Dakar, who was in second place in the general standings 10’31’’ behind Austin Jones at the start today, could suffer a big time loss.

Ricky Brabec quote
“Today we had Toby go down and hit the dirt. He’s a little bit injured, I think it’s his left shoulder and left arm. He hit pretty hard on the left and didn’t really know where he was. He asked me probably seven times where he was and who I was. I came across him and just hung out with him until the helicopter got there. What we do is dangerous, so it’s unfortunate that he is out. We hope he’s okay. It’s something we have to think about every time we put the gear on each morning. It could be any of us. This day last year we lost a really good friend in Paulo and today Toby crashed and went out of the rally, but he’s going to be ok. For sure, going on for the rest of the day was really difficult. The guys sent me on right behind Joan and Daniel Sanders, so I was stuck in the dust and I was really angry because I wasn’t in the dust before I came across Toby. There was a three-minute gap and we were just doing our own thing. I got stuck in the dust for a while and it kind of made me angry, so I just pushed and got around it. Then I kind of opened the stage with Joan the rest of the way. Me and Joan took turns opening and it was really fun. But things are shaking up, we’ve all got smoked tyres. There are three days left and stage 11 is going to be the longest one. Hopefully, we’ve finished okay today”.

Permalink Reply by Barb on Tuesday

Again, thanks for the updates. It is sad that Toby is hurt and out of the race. Ricky puts it well, what they do is very dangerous. It is always a relief when at the end of the rally no one has crashed and died. Let's hope everyone reaches the end safely. 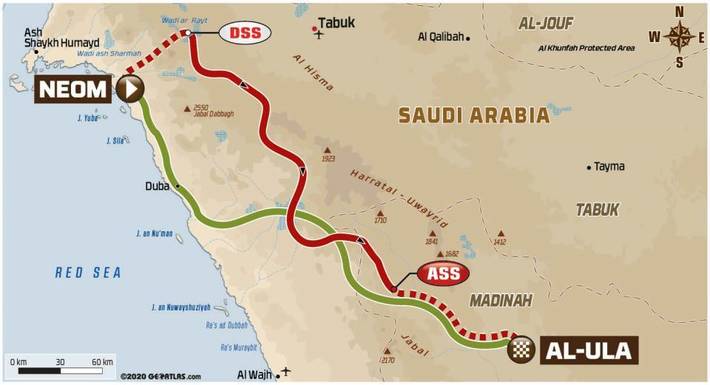 Permalink Reply by sabreguy on Wednesday

A rattled Nacho Cornejo has undergone a medical examination after soldiering on to the finish following his crash at km 252. The Chilean, who started today's stage in the overall lead, has been left with no choice but to withdraw from the race and leave his teammates Ricky Brabec and Kevin Benavides to duke it out for the win.
13:11 Honda scores 1-2-3!

Kevin Benavides came in third today, rounding off a Honda 1-2-3 both in the stage classification and in the general standings. Nacho Cornejo is no longer the overall leader after losing 17'42' to Ricky Brabec. The new leader, Kevin Benavides, is just over a minute ahead of Ricky Brabec and Nacho Cornejo with two stages to go until the finish in Jeddah. All in all, a great day for the Wings!
12:54 Brabec takes the spoils!

Ricky Brabec is the winner of stage 10. The American took the reins at km 126 and never looked back despite having to open the way after overtaking Nacho Cornejo. It's his third win of the year (including the prologue) and his sixth overall!