A Marathon before the resumption. The rally begins its return trip by heading towards what has become one of its regular stomping grounds since 2014. The Uyuni casern, which is well known to the raiders, will once again be transformed into a bivouac for a day. For this first part of the marathon stage, which will include very long sections of sandy tracks, the service park will be open to all vehicles, except for those entered in the assistance category. 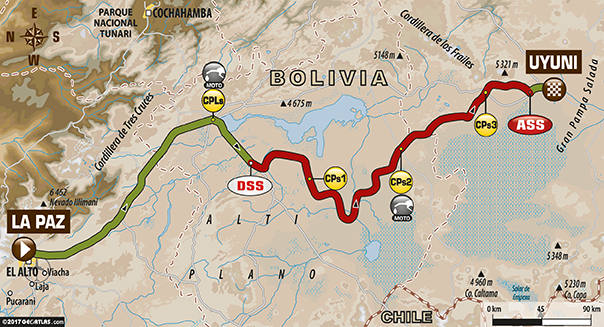 Following the cancellation of stage 6 on the eve of the rest day, persistent bad weather conditions forced the race directors to change the course of stage 7 from La Paz to Uyuni. A new course was designed and a new road book was drafted during the rest day.The new course is an unprecedented combination of the original routes of stages 6 and 7. Today's 161 km special will mainly take place on sandy terrain, sandwiched between a 400 km link section and another one 240 km long. The special starts at 10 am, with the first motorcycles expected to reach the Uyuni bivouac at 3.30 pm

Permalink Reply by Mike Kenyon on January 9, 2017 at 3:28pm
The 2 Toyota's 3rd and 5th. As they descend back to normal attitudes

Permalink Reply by Robert Ryan on January 9, 2017 at 10:08pm
Newer generation of Diesels about to enter service,will push the boundaries further. Jaguar/ LR has the new 3 litre Integnum straight six diesel in their F Pace SUV, pushing a min 300hp, can be tuned for 400hp for the SUV. Racing version would be interesting.

Well, what is interesting to me that you have not mentioned ,is that the PUG's are on a 38mm restrictor (1mm decrease) and the under 5399cc gasoline engines are also on a 38mm restrictor (1mm increase).
and the performance equalization, kind of. With the cancellation of Stage 6, we lost a long stage at altitude, to compare the 2 honestly.
A straight 6 is loooooooooooong for racing applications, IMO. But I also can't stand engines that run on detonation, and has to be force feed to equal the performance of a naturally aspirated on gasoline.

Permalink Reply by Robert Ryan on January 10, 2017 at 12:54am
Mike, you will find Diesels becoming more prominent, no matter what the configuration or restriction. VW pushed the development along with Audi/ Porsche at LeMans and Peugeot did the same thing.Since then they are becoming the engines too beat in endurance racing.

Permalink Reply by Mike Kenyon on January 9, 2017 at 3:26pm
I am seriously confused on Yazeed's status. Yesterday the ASO issues a statement say that Yazeed had lost his appeal to be reinstated after Yazeed quit. And yet , he's racing today. Welcome to the ASO.

I thought there was one more appeal process that will be reviewed next month ?

Permalink Reply by Bricoop on January 9, 2017 at 7:11pm
You'd think they could just look at his passport now, he's gonna lose this one.

Indeed! haven't had much time to follow, but the little DVR i watched, Brabec was struggling with road book,
Glad to hear he's back on track.

I saw this today, my first thought?, has Kyle Robbins seen this?

Are we hanging out here now for the DAKAR?